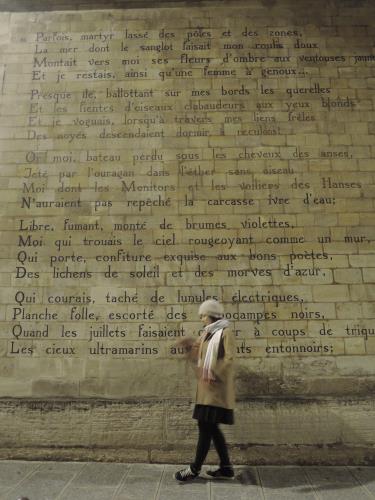 To know a city, many aspects could be the entry points, like food, music, art, etc. Standing in front of the travel book counter, it is not difficult to find a pile of “Kyoto, the writer leads the way”, “Paris literary strolling map” and other similar books. Literary walk has become a popular way to travel in recent years.

If we have to choose one city to experience, Paris would be the ideal one for literary walk. In 1920s, the ambience of literature and art as well as the eclectic ideological trend appealed writers from America, England and Ireland to stay abroad in Paris, just like a powerful magnet. Francis Scott Fitzgerald, James Joyce, Ezra Pound, Henry Miller, George Orwell were all pursuing dream and living in poverty in Paris. They freely published the masterpieces that were forbidden in their own countries, like Ulysses, Tropic of Cancer, etc. Those who chat, discuss and fool around in the Paris café become the masters of the literary world later.

When reaching “The Crazy Years” of Paris, as well as the golden age after World War I, the devastated Europe became great again because of a city and a group of artists and writers. More importantly, the blowout of Renaissance and the aftermath of the climax of writing were still remembered by people and were encouraging new productions. For example, Ernest Hemingway left Paris for 40 years and wrote A Moveable Feast. A fantasy movie Midnight in Paris by Woody Allen and the book Midnight in Paris co-published by commaBOOKS and Alone Publishing both make people wonder at the long lasting charm of literature.

The city between lines always has different looks. Paris is the miserable world under Hugo’s pen, a living hell described by Balzac, the upper class society obsessed by Marcel Proust, Baudelaire’s flowers of evil and the paradise of the vagrants from Benjamin. However, when you follow these great writers and poets to walk into the real place, you will find that besides reputable fashions, fascinating street and intoxicated wine and food, there are rich and enviable literary heritages like the residence of The Hunchback of Notre Dame by Hugo, Café de Flore where Sartre and Simone de Beauvoir visit every day, Shakespeare & Company that never rejects anyone, Oscar Wilde’s tomb with worldwide crazy fans’ lip prints, Les bouquinistes the world heritage site, Au Bonheur des Dames by Zola and Le Bon Marché, the first department store in the world and a whole wall printed with The Drunken Boat by genius poet Arthur Rimbaud.

Haven’t been to Paris? Let’s look at the number. In 2016, the number of varieties published by France is 103,534. Literature had the maximum market shares, which barely equals to the sum of social society plus lifestyle books. Even though the market scale of cultural products (including books, movies and musical products) has decreased in recent years, paper books are still the mainstream, accounting for nearly 60% market share. Although the golden age of culture has gone, the passion and spending power to literature of French could not be underestimated.

Readers might think that only the cosmopolitan city with writers coming forth in large numbers could have the possibility of literary walk. In fact, topographic writing and literary landscape are popular among Europe and America for a long time. Taiwan or even Hong Kong, which has shorter trading port history than Macao is advocating “literary walk” and blocks writing, like the “Community Writing” activity supported by The House of Hong Kong Literature and the “Taipei Literary Landscape” activity, etc. Although the impact of literature in Macao is weak, quite a few literary heritages could be linked together, for example, Tang Xianzu, Wu Li, Luís de Camões, Camilo Pessanha and contemporary Macao writers. Their writings could be developed into a tourist route which is not just about food, old buildings and casinos.

When people talking about cultural heritages, they could just think of architectures, natural views, or intangible cultural heritages like traditional festivals and handcraft. Literary heritages are actually the soft power of a city. Without free publication atmosphere, courageous and wise booksellers, uniform pricing mechanism of books, copyright protection system and inclusive cultural tolerance, Paris could not be the “Moveable Feast” for writers.

Animations for the summer

The double-edged sword of social media

Publishing is easy but selling is hard

A boulevard where you can have a timeout