As the COVID-19 pandemic spreads across the globe, governments are encouraging their citizens to help contain the virus by staying at home. Galleries had subsequently closed. Art festivals had also been cancelled or postponed. There is no doubt that cultural and creative industries have been hit hard by the virus. With challenges come new inspirations, cultural and creative industries in Macao are also making their innovations to overcome hardships during the pandemic.

When we are staying at home and make our shares of contribution to fighting COVID-19, cultural and creative industries across the globe are also helping through their unique ways. For instance, luxury fashion brand LVMH Group announced that it had converted its perfume factories for producing hand sanitisers, while fashion brand Dior has started making face masks. During home-quarantine, we not only need to make sure we have food to eat but also have arts and entertainment that satisfy our hunger for spiritual pleasure. That’s why some artists decided to put their works online and share them with everyone. Look at the Social Distancing Festival, for example. It called for artists around the world to upload their works to the Internet and share them with the audience. Hong Kong Repertory Theatre also launched the “Reviewing Classics” programme that allowed people to vote for the classic play that they want to watch again the most. The play with the highest votes has been streamed on the Internet since March 21. At the Smithsonian American Art Museum, there is also the “Experience American Art from Home” scheme that allows the general public to watch exhibitions online.

From offline to online

Cultural and creative industries in Macao are also making their innovations when facing challenges from the pandemic. Local theatre play society Hiu Kok had shared their work February 29 online on March 1. The theatre company had postponed or even cancelled several performance plans like Same Time, Next Year, Hiu Kok’s art director Hui Koc Kun said. Hiu Kok originally planned to perform six to eight shows from late February to March at the Macao Cultural Centre. The theatre company even planned to approach some businesses for helping to promote their ticket sales. However, several cultural facilities had been shut down due to the pandemic, which means Hiu Kok has to put off their plans. “If this had worked, we would continue this line of business and even make more new productions. We wouldn’t need to rely on the government’s support. But now we don’t have any show. There is not going to be any show in the second half of this year. Even if we could get our hands on some performance space, we don’t think we could easily find sponsorship from companies anyway since the economy is hard-hit by the pandemic. Who would help us promote our shows?” 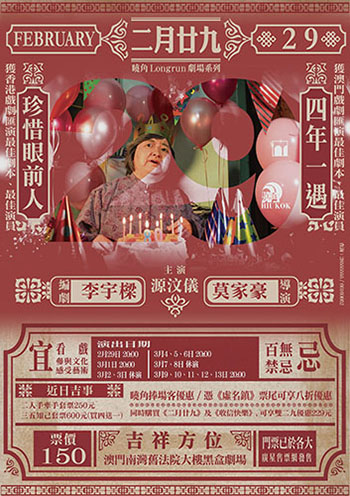 Hiu Kok’s tours in other destinations such as mainland China and Brazil had all been cancelled because of the pandemic. “When there is a challenge, there is also an opportunity,” Hui said. During this special time, Hiu Kok has been thinking about the development of the theatre industry and decided to upload their work February 29 to the Internet. Hiu Kok was the first theatre group in Macao to put their work on the Internet. “It wasn’t much of a strategy. We were only thinking like we couldn’t just sit around and wait. We needed to do something,” Hui said. “So we put February 29 out there. I don’t care about the views. As long as people are appreciating this work of ours then it is good already.” 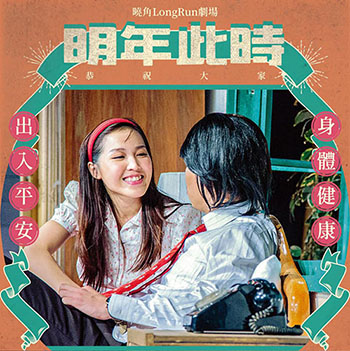 Hui also pointed out that there were mixed opinions about putting productions on the Internet among his friends. Many thought that there could be extended activities and some efforts in recreating stories. “Some friends mentioned the possibility of having supplementary content such as play review and extended activities that make theatre appear to be fun for the audience,” Hui said. “I would do them in the future because I don’t have that much time and people right now. This could be more meaningful, not just simply about putting your work on the Internet. It should be about using Internet technology to drive the development of art forward.”

Improving design and be ready

While theatre companies are actively working to expand their channels, souvenir shops are also making their adaptation to the pandemic situation. According to local souvenir brand O-Moon’s owner Jet Wu, a series of plans had been postponed due to the pandemic while several physical outlets in touristic areas have been significantly impacted by the situation. “Sometimes we would only have a two-digit sales volume. On some days we even had zero sales. Oftentimes, we only made a couple hundred or less than one hundred MOP,” Wu said with a bitter smile. “Sometimes the sales would hit four-digit on weekends. But before the pandemic, we had much better sales performance.” At present, O-Moon only has one outlet open in Macao while the outlet in Taipa only opens on weekends given there is need to save cost and that some sales staff have not returned to Macao for work yet. “Opening up all stores now would just be a waste of utility money because there is no customer,” Wu explained. 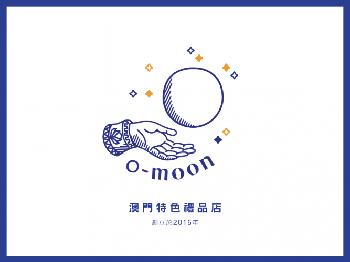 To mitigate the impact of the COVID-19 pandemic, O-Moon has rolled out a “buy two get one free” discount to attract more customers. From Wu’s perspective, consumption-stimulating measures such as gift card might not be effective because residents will tend to prioritise buying daily necessities instead of souvenirs. But Wu also looks to the positive side. “We need to think positively and prepare for exponential growth when the situation becomes better. We cannot let despair plague us,” Wu said. For instance, although the pandemic has indeed reduced business opportunities, it also provides designers with more time to come up with new inspirations. Now there is even sufficient time for brands to plan their future work in more detailed ways. “We are planning to turn O-Moon from a souvenir business into a fashion brand. We want to gradually transform from making souvenirs such as postcards and luggage belts to headbands and tote bags. We want to make things that are for everyone, not just tourists.” In addition to that, a number of companies and organisations such as Orbis have partnered with O-Moon on promotion design projects. “Since it is not a good time for retailing, we are now working with other companies and organisations for building up our reputation. After the pandemic, we will achieve rebound!” Wu said. 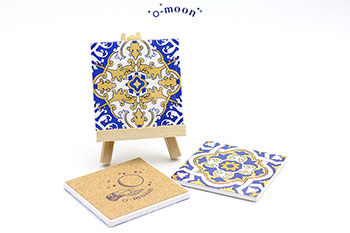 However, Wu is not very sure how this will play out. “Nothing is certain now. Even if you make perfect preparation for the future, there is still nothing much you can do as long as the pandemic continues to spread. This means the key here is still about when the pandemic will end!” Wu concluded. 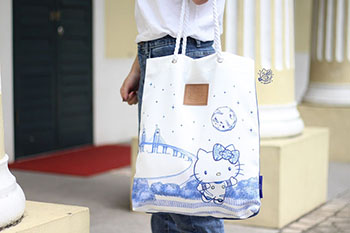 Filipe Miguel das Dores—Art as Vehicle for Passing Down History