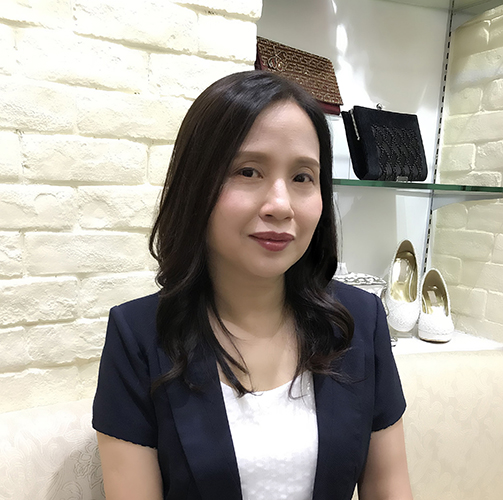 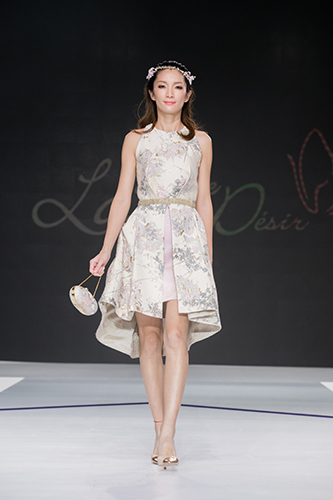 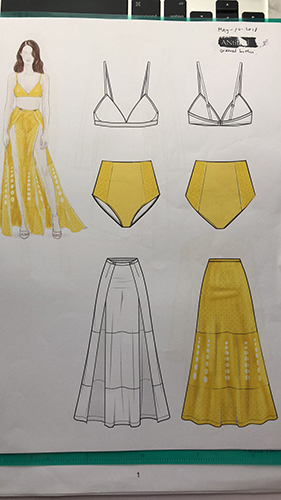 Without pattern-making, even the most beautiful fashion design would not be able to become a reality. However, pattern-making is not an easy task to complete in Macao. Two factors are taking into account. For one thing, there aren’t a lot of clothes-manufacturing demands in the city and therefore not that many factories are willing to accept the manufacturing orders from Macao. For another, many skilled tailors have already retired. Seeing this need in Macao, local fashion designer Kitty Ng decided to launch the LMD Pattern-Making Workshop in 2017. “At present, our clients are mostly young designers in Macao. They know how to do pattern-making, but they don’t necessarily have the skills to do it well,” Ng said. “Without good templates from pattern-making, you might lose the chance to win an award at a fashion competition or lose orders from your clients when doing business. That’s why having good pattern-making is very important. It is the first step in turning a design into a product.”

The passion for helping emerging designers

Ng has been working the line of fashion design for several years. She is a creative designer with great pattern-making skills and tailoring techniques. Since little, Ng had been accumulating practical skills in clothes-making when working at a factory, from basic jobs like sewing, attaching beads to handbags, to doing pearl embroidery. At the age of 15, Ng started to do pattern-making in the factory. When she was 18 years old, Ng was promoted as the director of the clothing manufacturing department at the factory. Ng also has an academic background in fashion design. She even learned 3D tailoring techniques from tailoring experts from French luxury brand CHANEL. In 2004, she started her own high-end fashion brand La Mode Désir. The brand had represented Macao in a number of fashion shows in the Cross-Strait regions. From 1985 to 2015, Ng has worked as a tutor for the Training Centre for Industrial Development, Macao Productivity and Technology Transfer Centre and the Department of Fashion Design at Macao Polytechnic Institute.

Ng’s creativity, skills and experiences have enabled her to invest more in her brand, without having to worry about developing other businesses. Besides making new fashion designs, Ng is also devoted to helping local young talents. The LMD Pattern-Making Workshop was established in 2017 to help local emerging designers with pattern making. According to Ng, she was driven by her passion to launch the workshop. “I have been teaching for a long time and I have trained some young talents. So I have natural incentives to help young designers excel in their field,” Ng said. “Then the government set up the Cultural Industry Fund, which provided me with the fund to open the LMD Pattern-Making Workshop.”

Pattern-making made possible for anything wearable

The pattern-making workshop is named LMD, which is short for La Mode Désir. The workshop’s clients are mostly young designers in Macao, some are from Hong Kong, mainland China, Southeast Asia, etc. From clothes, accessories to fashion items, anything that is wearable can enjoy LMD’s services. “For instance, if you want to make a garment with lights, then we would try every means to put LED lights on it to deliver the ideal visual effect that the client wants,” Ng said, explaining that the price of pattern-making for a garment is decided by its size, materials, delivery time, etc. “But since we had subsidy from the Cultural Industry Fund at that time, we were able to provide a 30% off discount for local designers. The discount could even be bigger than that.”

Ng pointed out that it is very convenient for local designers to consult with LMD because it is located in the central area of Macao and opens from 12 at noon until 9 in the evening. “If you approach businesses in mainland China, you would discover that tailors in mainland would be off work at five in the afternoon. You can’t really find anyone after the business hour,” Ng explained, saying that as a designer she knows designers’ needs better and therefore could provide some professional advice for other designers. “I would start making patterns for a fashion sample with the client by my side. I would show my client how to make patterns for clothes step by step. That’s what is special about my service.”

According to Ng, high-end couture is very different from pattern-making, as the former is making fashion design of one’s own while the latter is more about turning other people’s concepts and designs into a reality. The fact that young designers are generally more creative also allows Ng to learn a lot when making patterns for her clients. “I know how to make clothes, so I would tend to be more reserved. I would not design clothes that I cannot make. Even if I could make some designs into a reality, I might still give them up considering the difficulty and high cost,” Ng said. “So my works tend to go for safe directions. I need to make sure I can make them without putting too much pressure on me. But young designers oftentimes do not realise the risks coming from the decisions they make in their design. That’s why they will take their creativity farther. I think this is good because fashion design is essentially about creativity. Fashion means you have to be ahead of your time. I have learned a lot from young designers when doing the workshop.”

The workshop had stopped applying for subsidies from the Cultural Industry Fund. But Ng is still offering a 30% discount to local designers nonetheless. “The 30% discount doesn’t cause me to lose money. It would only mean I am not making any money out of it. So I would continue to keep it this way in the long run,” Ng said. She also mentioned that the Subsidy Programme for Fashion Design on Sample Making launched by the Cultural Affairs Bureau has been providing great support for the local fashion industry for many years. Ng had noticed several designers with great potential who often make it into the second round of the subsidy programme. Subsequently, Ng advised the government to provide two sets of subsidy programme: one focuses on helping emerging designers and provide them with more opportunities to enter the industry while the other one focuses on assisting designers with certain experiences in the industry to go farther.

“Since they already have relevant experiences, they could still make it into the second round of the programme for consecutive years without making much progress,” Ng recalled. “So I thought we could design another subsidy programme that targets designers with experiences and those who have been subsidised by the programme before. In my opinion, this will help them go farther in fashion and subsequently drive the entire industry forward!”