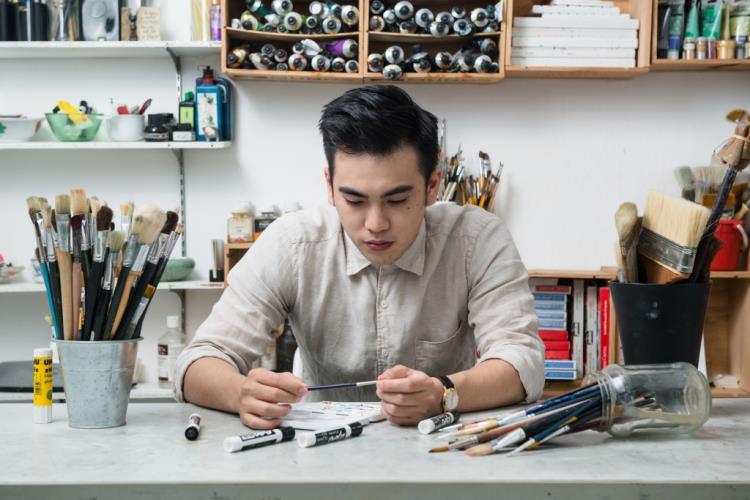 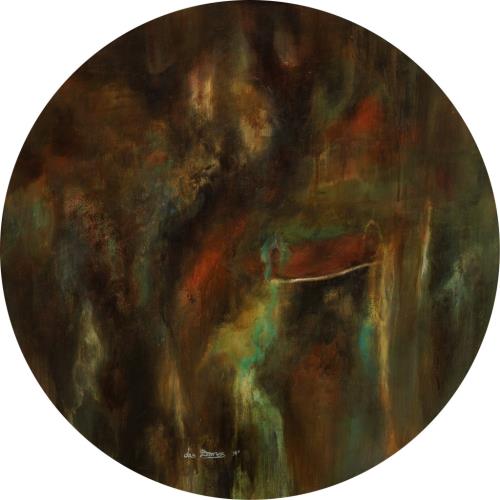 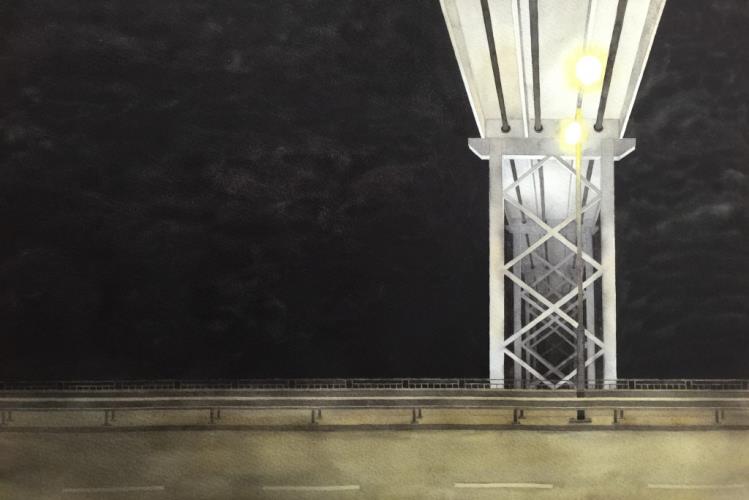 Filipe Miguel das Dores—Art as Vehicle for Passing Down History

Nobody expected that Filipe Miguel das Dores could do well when he decided to employ the skills of drawing architectural plans into watercolour painting. Some of the senior painters adhered to the more conventional concept that watercolour has to be of freehand style and attention to detail is not necessary. José Lázaro das Dores, Filipe’s cousin, also doubted that what Filipe intended to do was a time waster as it would be difficult to master a number of techniques and the progress of learning would be slow. However, Filipe successfully combined both drawing techniques and he was awarded the John Purcell Paper Prize by the Royal Institute of Painters in Water Colours twice in two consecutive years.  “I think I am quite rebellious and stubborn. You say I can’t do it, I’ll prove you wrong.”

Being an awarded artist is one of the means to rise to fame in painting. Filipe believes that emerging artists have to choose to participate in the right competitions, and the most important is to uphold one’s own character and improve the art skills. It’s not necessary to change one’s style to suit what the judging panel wants. “You will never know what the panellists are looking for, and every year the panel is composed of different people.”

What Filipe experienced when he was a child still has a strong impact on his style today. His grandfather Jose das Dores often made scale models at home. Classical architecture is usually a complicated structure, but Filipe’s grandfather could meticulously resemble the models according to the architectural drawings, and all details adhered to the size ratios. The model of the Post Office Building made by him is one of the exhibits in the Macao Museum of Art. Filipe was brought up by his grandfather. When Jose was working, Filipe would stand beside him and was totally fascinated by the drawings.

When Filipe grew older, he started learning how to draw and got an idea of combining architectural drawing with watercolours.

“To construct an architectural perspective drawing, usually depth of field is required when drawing a building in perspective, so that the foreground is sharper than the background. But for me, I need a grasp of mathematics to draw, too. I have to make a draft first and then copy it to a larger draft.” Take the Clube Militar de Macau as an example, Filipe has to first count the pillars, calculate the distance between the pillars, and then count the vases below the fences. Observing details is an absolute necessity. Once you get the painting brush in hand, you have to draw as if you are sketching an architectural plan.

It seems nothing special to draw an architectural plan with watercolours, but the drawings are all filled with Filipe’s feelings and personal experience. His winning piece last year, Mario Night, is about his Gameboy. He once walked into a back alley in the area of Igreja da Sé and discovered many pipes on a wall which resemble a scene from Gameboy’s “Super Mario Bros” game. He recalled that when he was a child he bought his very first Gameboy from a toy shop on Rua do Campo, and it was the transparent model. In those days, it was something that deserved to be bragged about among peers.

Apart from Mario Night, Filipe has a number of drawings about Macao at night. When he was studying in high school, Filipe was rebellious and didn’t like going home. He preferred wandering on streets with his good friends and chatted till midnight. Because of this, he discovered that Macao at night infused with otherworldliness and tranquillity, and this has become his spring of inspiration.

Filipe describes himself a “rebel” when he was an adolescent. He was sent to the Macau Portuguese School for his high school education. However, with Portuguese as the medium of instruction, Filipe found that the school didn’t really suit him, and therefore he elected subjects that were easy to study and pass such as drawing. But things weren’t really on the right track and he decided to quit finally. He then attended an evening school only because he felt that he had to complete the secondary education.

Incidentally, Filipe got to know that his cousin José Lázaro das Dores has become a painter once he graduated from the Macao Polytechnic Institute. Filipe doesn’t like to read, but he loves to paint. “I went to any lengths to learn. I went to his studio and chatted with him. Later on we got to know each other more and he started teaching me drawing.” Unlike the teaching in an institute which focuses a lot on theories and techniques, José Lázaro encouraged Filipe to use his imagination and to keep on trying so as to get more experience in the progress of creating artwork.

An Excellent Artist Has to Master Extensive Knowledge

During the time when he was taught by his cousin, Filipe discovered that painting is not only about filling colours and lines on paper. An abandoned closet door picked from the trash depot or even construction waste, after using a propane torch to burn it or splashing it with ink, can also become a piece of painting. Learning to paint is not only about learning art. You need to get to know something about timepieces, wine-tasting, history and international relations as well. An excellent artist has to learn extensive knowledge so as to let his thoughts infused into his artwork.

When the news about Filipe being awarded in London spread, a student from Macao who studied international relations in London came to visit him. They went to have coffee and started talking about the Israeli–Palestinian conflict. Fortunately when Filipe was studying under his cousin, he has already known the importance of learning something about everything and everything about something, and therefore he was able to debate with this student.

Filipe’s cousin also taught him history of contemporary art in Macao. “At that time I realised that the style of painting I learnt from my cousin and the philosophy behind it were all passed down from Mio Pang Fei. In the 1980s, the art community in Macao was still very quiet. But people like Carlos Marreiros fought hard for improvements to artists’ rights and benefits and tried to look for markets for them. When I draw, I gradually realised that I am not doodling but I am receiving what is being passed down from senior artists.”

Although Filipe has learnt a lot from his cousin, three years ago, he decided to enroll in a Bachelor’s degree of Visual Art in the Macao Polytechnic Institute so as to get more professional training and to respond to social expectations that having a tertiary degree qualification is a must. However, Filipe, being consistently rebellious, has his two cents regarding tertiary education.

“Honestly speaking, I didn’t study hard. I spent a lot of time on doing my own artwork. I especially elected cross-disciplinary subjects such as sculpturing and printmaking because if I do it on my own the costs would be too high for me to bear.”

Filipe’s major criticism about tertiary education is how professionalism is perceived. Once he asked his teacher for suggestions of quality writing brushes. But his teacher refused to give any suggestions and said that in his current level of study, he didn’t need to use good quality brushes.

“In fact I was just looking for a gift. But a lot of seniors think that the time has not yet come for you to learn that. The system sets a lot of rules because of professionalism. But what is professionalism about? Does it mean having certain qualification? Or possessing certain knowledge? Or knowing how to apply the knowledge you have learnt? I believe it’s the latter and that’s why I think it’s not necessary to establish so many rules.”