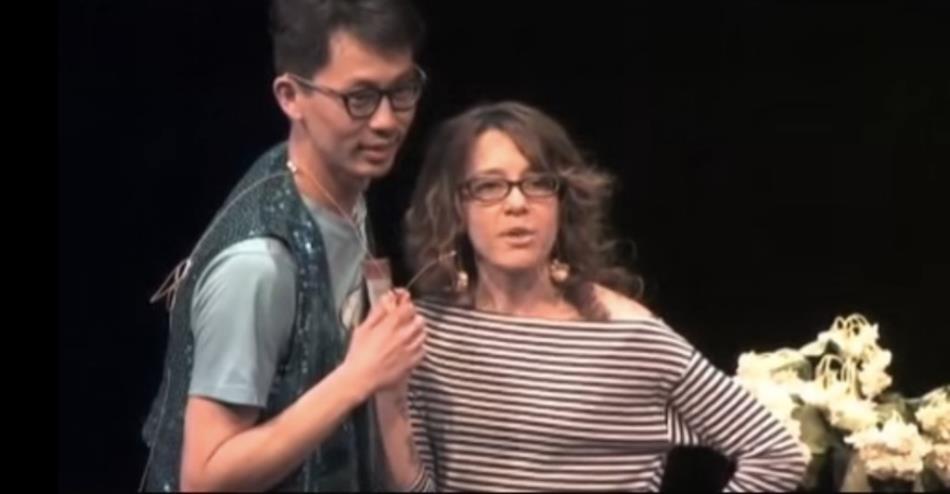 Philip Huang, an artist, staged a demonstration on how to amass funding for a small-scale arts project.  Source: www.youtube.com/watch?v=TnT6eC0-tV0

As Donald Trump becomes the new president, the arts sector in the United States is beginning to fear that the government will drastically reduce the funding support to National Endowment for the Arts, or even abolish this federal arts funding body, set up since the 1860s. However, even if it were to be removed, it may not be as serious as some imagine, because the non-profit arts organisations in the United States do not rely on government funding, but rely largely on private and commercial support. On the other hand, in Macao, private and commercial funding for arts is relatively scarce, and so non-profit organisiations tend to rely on the government for support. In the long term, this mode of operation limits the scope of development and adaptability of these organisations.

When we consider the commercial funding for arts in Macao, it is impossible not to think about the role of the gaming enterprises. According to annual report statistics in 2015, corporate donations from gaming enterprises went mainly to charities and educational institutions, while their support for the arts is less obvious. For some of these enterprises, donation to the arts was not even featured in the annual reports, which indicates that their low priority for supporting the arts. Among the six major gaming enterprises, SJM is seen as being more willing to support local arts and cultural activities, while Sands China previously offered venue sponsorship to major arts event(s), while MGM has focused more on organising its own arts exhibitions. While some of these enterprises are willing to offer some sponsorships to arts projects, a more detailed scrutiny shows that most of these sponsorships were for events that featured major international arts organisations. Given their considerations on the commercial viability and publicity impact of projects, these corporations are much less keen to support local, small-scaled arts groups or individual artists.

In fact, even in the United States where there is more commercial arts funding, corporations are keen to sponsor more prestigious and large-scale arts organisations, making it hard for smaller arts bodies and individual artists to obtain their much-needed funding. Hence, some mediating agencies involved in promoting regional arts development have become more interested in promoting private sponsorship. In San Francisco Bay Area, a project aimed at encouraging private sponsorship to the arts, The Fund For Artist Matching Commissions Program, is an excellent example. Operated by the regional trust, artists or arts groups can apply for a sponsorship up to the value of US$5,000-US$10,000, but this must be matched by a private sponsorship of the same value, preferably from a new sponsor. From 2004 to 2010, this scheme has helped a total of 181 artists with 116 arts commissions. Altogether, it has attracted a total of US$729,254 worth of donation from 3,120 sponsors. Findings from a conclusive study report on this scheme show that the backgrounds, values and sponsorship incentives for these sponsors are very different from the typical arts sponsors. Such findings are definitely revealing from the arts management perspective.

In fact, many sponsors participating in this scheme are themselves a large proportion of young or middle-aged artists or art practitioners, who are keenly interested in many issues such as social justice, environmental protection and cultural diversity. The primary reasons for their willingness to support art projects are likely related to their own identity as artists, or that they are related to the culture or community where these projects operate. Some of them decided to offer funding support because of the themes or formats of the art projects. Many successful applicants discovered, to their surprise, that the funding bids were not as difficult as they assumed. Apparently, there are people in the community who share the values and ideas of these artists, and are willing to support worthwhile causes.

The study report also highlights an interesting short film that encourages artists to identify their own patrons. In the film, the artist gives a talk to demonstrate to the audience how to source funding for his small-scale arts project. His persuasive speech captivates the audience to such an extent that, in just a few minutes’ time, many from the audience offered to make their donations. Humour aside, this film certainly brings home the message that, if we are willing to explore, there are indeed people around us who are generous enough to fund the arts.

My backpack for touring

From artist to art commentator

The lights of the city