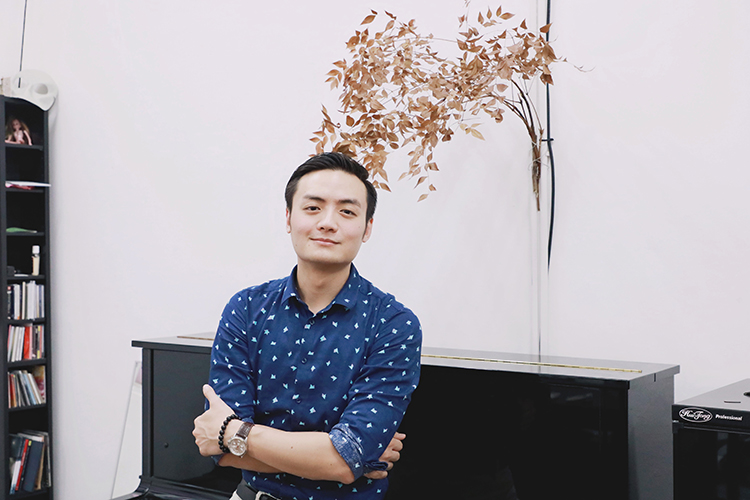 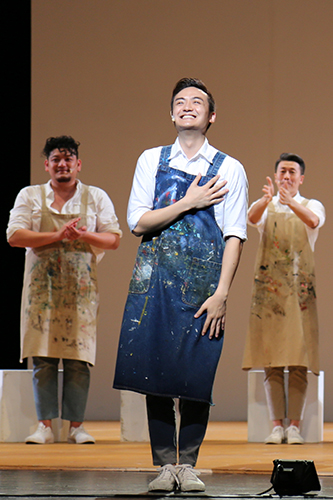 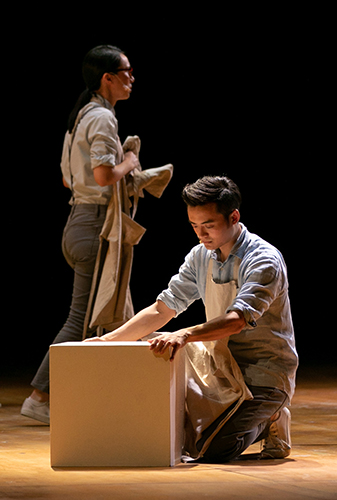 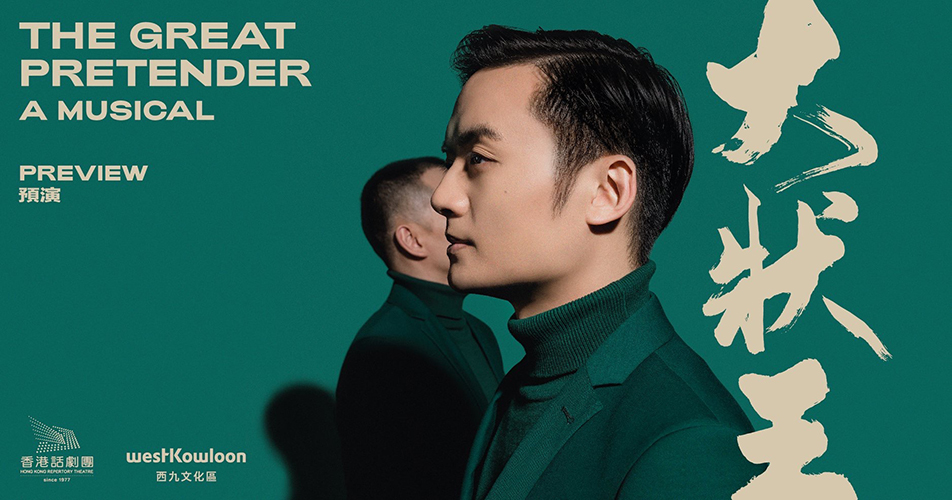 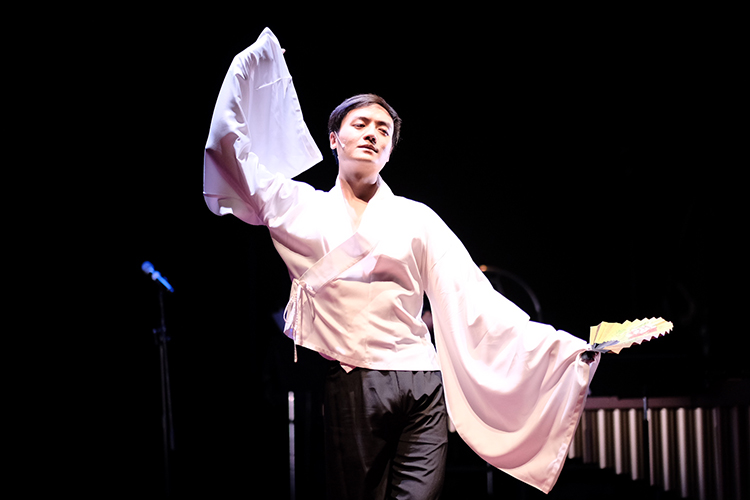 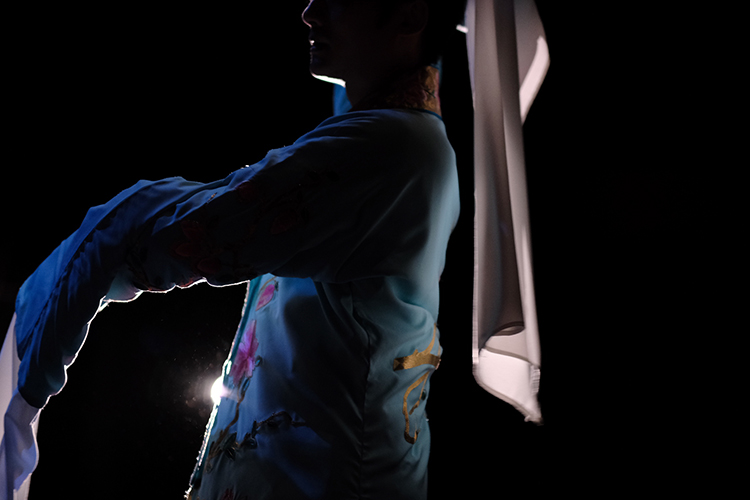 Jordan Cheng is a very busy musical actor who has been preoccupied with his tour in recent years. But he was still able to make it to the interview on time nonetheless. It was actually the second interview he scheduled to have that day while he only got to stay in Macao for one day after returning from touring. And he would be on his way to Hong Kong for preparing for the next performance and promotion activities. Cheng just finished performing for Art School Musical directed by Hong Kong director Edward Lam before taking the interview. His next musical will go on show soon in Hong Kong. In late November, Mr. Shi and His Lover will return to Macao for show after over fifty shows in overseas markets. “Mr. Shi and His Lover plans to start a new round of international tour next year. More details will be announced soon,” he said.

As a musical actor, Cheng had been praised by famous Hong Kong fashion designer William Tang in his exclusive column and gotten the opportunity to work with Hong Kong Sinfonietta’s resident conductor Yip Wing-sie from time to time. He had also worked with Marsha Yuan and Corinna Chamberlain when performing for musical revue Smokey Joe’s Café. In 2018, he was nominated for Best Actor at the Canada’s Dora Awards for his performance in Mr. Shi and His Lover. As a musical actor from Macao, Cheng actually studied English Communications for his undergraduate degree. According to Cheng, he did learn to play the piano when he was little but never learned how to sing. In a summer vacation during college, he decided to do something he had never done before and participated in a performance organised by the Macao Cultural Centre. It was his first performance and he fell in love with the stage. Later he got to know more about musical theatre after joining a musical programme at the centre. Cheng eventually decided to give up his government job that promised stability and took the offer from Guildford School of Acting and went to the UK to study for an MA in Theatre.

“I struggled to reach a decision on whether I should go for it. At the end of the day, it was a major decision for me that will affect many of my life decisions in the future. But in the end I decided to bite the bullet and pursue musical theatre as my career.”

Cheng has been travelling around the world to perform on different stages. Many might envy his glamorous performing career. But little do people know the efforts that Cheng has made behind the stage. Some theatre producers that have worked with Cheng before all commented that Cheng is a very disciplined actor who is always prepared: he is always ready when he is at a rehearsal without needing to warm up and open his voice; when he is about to go on a tour, he would strictly control his diet and sleeping pattern. Before we started the interview, Cheng felt thirsty and searched the room but could only find some wine and soda drinks. But he drank neither of them. He only wanted to drink water.

This level of discipline might come from his experience studying in the UK. “When I was studying in the UK, I felt like I must be capable in some areas since I got the offer. But I felt a sense of defeat in the very first week there,” Cheng recalled. “My classmates were very hardworking. They would start to research on the characters and look for relevant information once they got the script. I still remember they would bring stacks of song sheets to class and ready to sing. In comparison, I only had two song sheets that I randomly printed in the library.”

“When I was living in Macao, which is a small city, I wouldn’t feel the need to be competitive. But once you are in a big industry where the competition is fierce, you would need to concentrate and become very focused on what you are doing. But you cannot devalue yourself and think you are not worth it,” Cheng said.

“So I learned from my classmates about what truly makes artists professional,” Cheng said. “Of course, you also need to learn the techniques and skills. You need to learn how to sing well and dance well. These require skills and techniques. But what really impressed me when I was doing my degree in the UK was the process of becoming a prepared and confident artist. Only through this way will you qualify as an artist,” he said.

Returning to Asia, a market with potential

At the graduation performance, there were many agents who came to find potential actors. According to Cheng, given the fact that there weren’t that many Asian faces in the musical industry in the UK, a number of agents wanted to sign him as an actor. But he eventually rejected them. “To be honest, I was hesitant about it. I thought it was actually quite exciting to be able to perform and work at the West End.” But Cheng saw the potential in Asia’s musical sector and therefore decided to come back. “As a matter of fact, musical is becoming increasingly popular in Japan, Taiwan, Hong Kong, mainland China and South Korea,” he explained. “South Korea has actually become a must-go destination in Asia for musical companies. In mainland China, there is also a hype for musical production. So I believe I had made the right decision. I believe we can find our own language in making musical.”

So how about the musical industry in Macao? “I am not pessimistic about it. But we need to work together to make it better. I am also hoping that we would be able to get more people’s support. The musical industry wouldn’t be able to make it work without any of these elements,” Cheng said. “This is not something that can be achieved in a short time as well. It is not like if I give you 50 million and then you would be able to produce a masterpiece. It doesn’t work like that. You need time to incubate it. Local musical makers and performers cannot succeed in every attempt they make. But they can gradually find a suitable path after trying and exploring. It takes time. And there might be uphills and failures. But it is perfectly normal.”

Keeping up with the dream and not giving up

Cheng now resides in Hong Kong. It has been seven years from graduating from college but he feels he is still quite new in the industry as an actor since he is still exploring and learning through working with several other artists. “I will continue to work as an actor for now but I will also keep on creating content. I will not give it up. I am hoping that I will be able to write more works,” he said. “I wish more people can love theatre just like I do.”

So, what are Cheng’s advices for young talents who see the musical industry as a career option? “Don’t think little of yourself,” Cheng said firmly. “Of course, you need to be modest and learn. But don’t underestimate yourself. If I had the mentality that becoming an actor couldn’t guarantee me an income in Macao anyway when I got the offer from graduate school, I might still be working a job and not being able to do things that I enjoy. So I would say just give it a try. Why not?”

Art Basel: transforming the art scene of a city