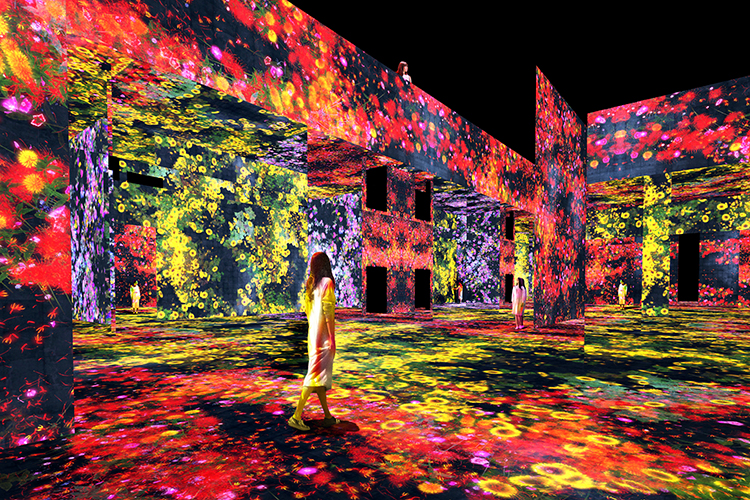 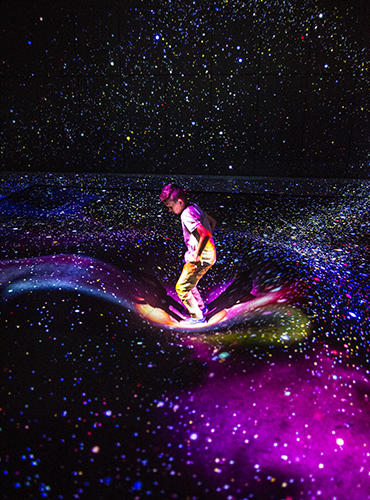 In recent years, international new media art group teamLab has been gaining quite a popularity around the globe. It makes use of digital technology to build up brand new art exhibitions, changing the general public’s perception of art museums and galleries. teamLab’s exhibitions have been so popular that it is extremely difficult for exhibition lovers to find a ticket. Considered as one of the top ten must-go exhibitions in the world, teamLab will debut in Macao this year after having successfully held popular exhibitions in Paris, London, the Silicon Valley, Singapore and Tokyo.

So what are the design concepts behind teamLab SuperNature Macao? In this issue, we have invited David Baxley, Vice President for Regional Entertainment at Sands China and Marina Bay Sands, to share the stories behind the upcoming exhibition.

Bringing teamLab to Macao at the right time

teamLab is an increasingly popular brand in Asia. teamLab Borderless in Tokyo, which opened in June 2018 for example, has attracted over 2.3 million visitors from 160 countries and regions. It set a record for most visitors in a year for a single-artist museum, even surpassing the Van Gogh Museum in Amsterdam (around 2.1 million visitors).  From Baxley’s perspective, teamLab’s success lies in its wide appeal to both art lovers and those enjoy the immersive technology experience. teamLab is a mass-market art attraction that combines elements of entertainment, education and technology and appeals to visitors of all ages.

“I was introduced to teamLab when we brought ‘Future World’ to the ArtScience Museum at the Marina Bay Sands Hotel in Singapore in 2016. After witnessing the fantastic success of ‘Future World’, I became convinced that something like this would be ideal for an international tourist destination like Macao,” Baxley said, explaining how teamLab came into Macao’s attention. “I have been involved in all aspects of the project, from negotiation to budgeting, construction, etc., to bring teamLab to Macao.”

An art space that integrates humans, nature and art

Why teamLab’s project in Macao is called teamLab SuperNature? “teamLab SuperNature will offer what teamLab calls a ‘body immersive’ interactive experience that let visitors explore new relationships between humans and nature through technology,” Baxley explained. “Visitors will experience artworks that blur the boundaries between subjective and objective and the physical and digital. teamLab believes this experience will allow visitors to gain a fresh perspective on the tension between the natural and artificial aspects of the world.”

“teamLab SuperNature covers an area of 5,000 square meters and has higher ceilings and more volume than other teamLab museums. Different from the exhibition opened in November last year at Shanghai museum, teamLab SuperNature will include roughly 25% of the space dedicated to a kids play area. It will also feature the world premiere of an artwork called ‘Massless Clouds Between Sculpture and Life’ that will simulate weather and allow visitors to interact with synthetic clouds swirling in a vortex,” Baxley said. “I believe this is another breakthrough in art forms that will attract lots of fans!”

A new Instagram-worthy spot in Macao

“Sands China has been the clear leader in bringing world-class entertainment to Macao since 2006. In this project, we have transformed the eight-metre-high space into an extremely complex, 3D world with varying elevations, featuring constantly changing, immersive artworks,” Baxley explained. “With over 22,000 individual technical components, the organisation and coordination of the exhibition were extremely challenging.  However, teamLab is extremely knowledgeable and precise about what is needed for the artworks and in the end, with the joint effort of the curation team, it all came together miraculously!”

teamLab SuperNature will provide visitors with a series of innovative experiences, including Future Park and Athletics Forest. Future Park is an educational solution that promotes co-creative and collaborative creation, aiming to provide an amusement park where everyone can co-create freely. Athletics Forest is based on the concept of understanding the world through the body and thinking of the world three-dimensionally. It creats a new “creative physical space” that trains spatial recognition ability by promoting the growth of the brain and body. Baxley believes that teamLab SuperNature will become a new Instagram-spot in Macao. His team will further promote teamLab SuperNature through different market promotion activities to build up its reputation.

teamLab is represented by Pace Gallery.