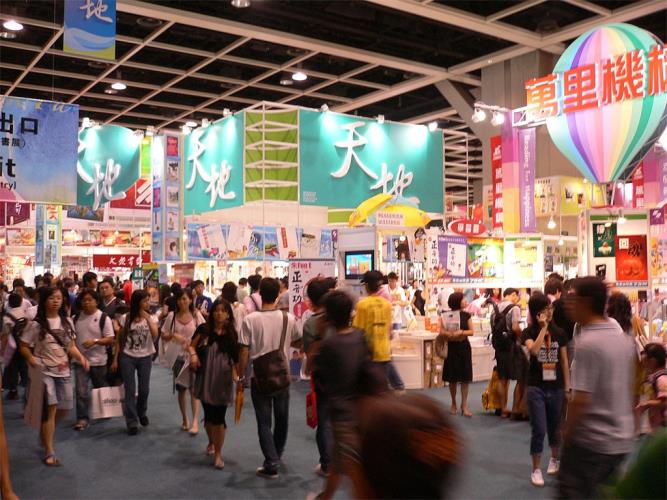 The cramped city of Macao hosts three book fairs every year, but all are of small scales. In face of the spectacular book fairs held in neighbouring areas like Hong Kong and Taiwan, it is necessary for Macao to reform its book fairs to stay competitive.

The three book exhibitions in Macao are held in spring, summer and autumn respectively. The Spring Book Fair is the earliest one held each year. According to Sio Chio Fai, general manager of Starlight Bookstore, it sells the highest number of books among the three. Readers are more motivated to visit the fair to check out new books in spring time. The summer fair often clashes with the Hong Kong Book Fair, which affects the availability of books in Macao because they are only sent in after the Hong Kong Book Fair wraps up. Also readers in Macao would choose to purchase in the Hong Kong Book Fair to start reading earlier, thus hindering the market of the summer book fair. As for the autumn one, Sio says it is relatively stable as there are fewer factors affecting it.

The 2015 Spring Book Fair has been held in late March to early April. Coinciding with the Easter holidays, Sio says the number of visitors is great and the revenue has upped by 20% compared to last year. Sio says: “The revenue in the past was about MOP40,000 per day, and it went up to more than MOP50,000 a day this year. I have been observing the crowd and the readership every day, and the main readers are parents and youngsters. The government has been promoting reading in schools in recent years, and I believe the increase of youngsters is partly driven by that. Around 20% of youngsters are fresh faces, instead of regular customers.”

Sio says the biggest spenders are parents, and picture books are the key sellers this year. At least a quarter of bookstalls are selling picture books––the exquisite designs and illustrations not only attract children, but also adults. Foreign picture books are very refined. Taiwan publishers saw the potential of such books in the Chinese market and have translated European picture books massively––those from France and Italy are the most popular. In the fair, a family purchases four to six picture books on average. Those who spend up to MOP2,000 are regarded as big spenders. Sio says: “In the past, it is not unusual for a family to spend up to MOP5,000 to MOP6,000, but it is a rare scene in the last two years. We have thought of different ways to attract customers, like organising new book launches with authors during the fair; holding handicraft-making sessions for children; organising Cosplay shows or combining it with online games, etc. But we feel that these are not in line with Macao book fairs’ styles, so we didn’t continue doing those.” Sio points out that he organises book fairs to let readers purchase books and interact with authors. He says it might seem old-fashioned, but he insists that book fairs should remain loyal to their own philosophy.

As for the future development of Macao’s book fairs, Macao author Joe Tang, who has been to the book fairs of Hong Kong, Macao and Taiwan, made a comparison among the three places, and Macao may take reference from it. He says: “Taiwan has more resources in literature and publishing, while Hong Kong is more commercial. But Macao sells books through discounts and holds several book fairs in one year, and the positioning is vague.”

“The market is small in Macao and resources for the cultural sector is dispersed. We may consider if we want to organise a book fair that doesn’t only sell books, but one that combines arts like movies, music and dramas. For instance, can we hold the world’s smallest but most refined book fair? It is difficult for Macao to throw a big-scale and comprehensive one, so we might as well try targeting at the niche market and make a fair that combines Macao’s distinguishing features, looking at Asia and even the whole world.