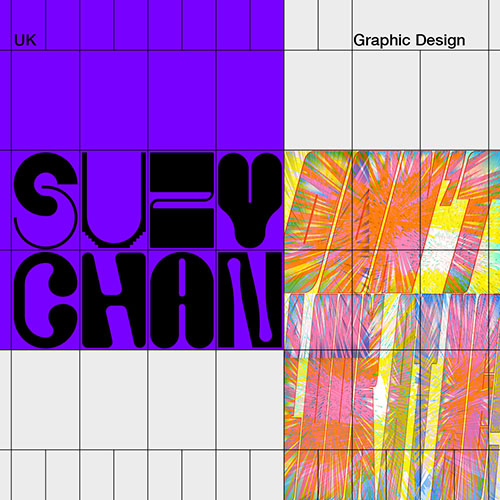 Suzy Chan: design should be more than just business

Local emerging graphic designer Suzy Chan, graduated from the College of Communication at the University of the Arts London with 1st Honours, won Project of the Year of British site It’s Nice That, a website focusing on creative designs. Chan’s project was reported by AIGA’s Eye on Design magazine, receiving recognition and praises from the industry as a young designer. “Designers should reflect on society, culture and psychology and build up one’s design philosophy and value. Through this, designers’ works will be able to break free from materialistic market trends,” Chan said. In this issue, we have invited Suzy Chan to share with us her journey as a student and emerginig talent in the design industry. 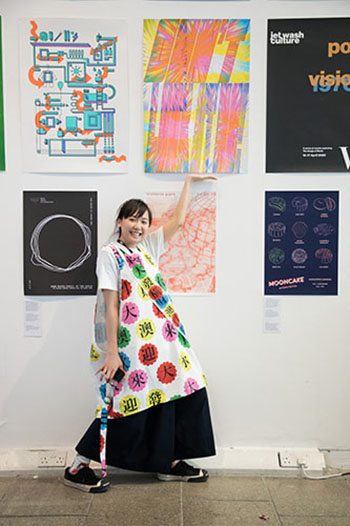 Growing up as a straight-A student, Chan showed a knack for art. She went to a professional art and design academy in Beijing during high school time. When it was time for going to college, she successfully made it into Guangzhou Academy of Fine Arts. “Since I was a kid, I had been travelling between mainland China and Macao. This experience helped me understand different societies, which also had a huge influence over my later life choices and art designs,” Chan said. When Chan was a year-one freshman at Guangzhou Academy of Fine Arts, she achieved a cumulative GPA of 4.0, often surprising professors’ expectations when doing course briefs. However, as she further proceeded her learning at the academy, she realised that the higher education model in mainland China failed to inspire her in design. “If we don’t get deeper into subjects like society, culture, history and psychology in college and build up our design philosophy and value, then wouldn’t we become merely supporters of consumerism?” Chan commented. That’s why Chan decided to drop out of Guangzhou Academy of Fine Arts after the completion of year-one study and applied for the College of Communication at University of the Arts London.

“Design education in the UK focuses more on nurturing students’ ability to think, especially the ability to think critically,” Chan explained. “Besides design courses, we also had courses that teach about sociology. For instance, I studied courses such as individual identity, national identity, journalism and fan culture. I listened to classmates from different cultural backgrounds expressing their opinions on the same issue we looked at. This allowed me to go beyond learning about design and know more about the associations between design, society and culture.” 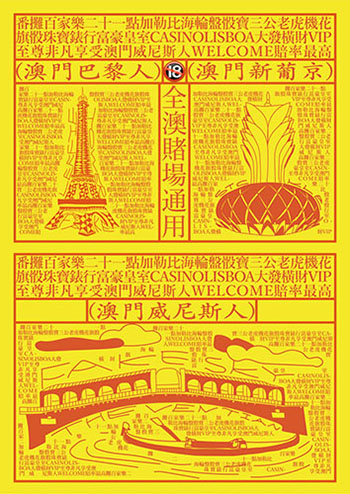 Self expression about social issues

Chan spent her spare time doing part-time jobs to fit into the local culture when she was studying in the UK. She met lots of immigrant friends of different nationalities with different cultural backgrounds because of her part-time jobs. She heard stories about an immigrant who immigrated illegally to the UK from Fujian over a decade ago, a confrontation caused by credit card theft committed by a Somalian refugee, and strange rules set up by a business owner from Hong Kong that aimed to evade taxation... “These experiences are precious to me. They enabled me to look at the world from a new perspective, which also allows me to think deeper about how designs can shape society. That’s why many of my designs are associated with social issues.”

Chan made use of elements of Chinese traditional rituals and Macao’s casino advertisements in her works, hoping to encourage Macao residents to have more conversations with the government. From her perspective, this can help strike a balance between developing the economy and sustaining the ecosystem. She had also voiced out for protestors in London’s Chinatown who were protesting against police entrapments. What’s more, Chan keeps track of issues such as the connection between snack advertisements and cults, plastic particles in the ocean, and greenhouse fruits. “Overall, I don’t have a particular design style. If I were to describe my design style, I would say I combine self expression with social issues because I believe graphic design is a public platform for expression,” Chan explained. “As a designer, I need to express myself through my works after researching different social issues. This will maximise the power of design, granting design with more value than just commercial usage.”

Not a “hip designer”?

In 2019, Chan graduated from the College of Communication at the University of the Arts London with 1st Honours. In the same year, Chan’s graduation project won Project of the Year of British site It’s Nice That, a website focusing on creativity. “They were not selecting certain design works, but designers. The panel would evaluate applicants’ projects in college, including their understanding of design and future career plan,” Chan said. “Platforms like this offer great support to emerging designers like me in breaking the structural barrier. I think all industries should pay more attention to young talents whom are considered as inexperienced newcomers who easily mess things up.” Chan is now a full-time freelancer, taking on projects that mainly come from overseas markets and some from mainland China. “You need to be forward-looking when making a design in order to roll out a product that holds significant value. It is the same for graphic design,” Chan said. “So when I am talking to my clients, I would first think about whether I could deliver the things that they want. If sales performance is the metric, then I might not be the kind of designer that some clients are looking for.” This young designer from Macao just recently got enrolled in a graduate programme of the Royal College of Art in the UK. However, Chan is satisfied with her work now and decides to continue working for some time until she feels there is a need for further study. In addition, Chan believes that designers should not stay within their comfort zone and only make designs that cater to market trends. “Market trends are only one set of criteria. We also need to think about other things, such as what kind of drastic changes there will be globally in the future (especially after the pandemic), public opinions and how people’s demand for visual designs will change. I believe these are important questions worth exploring if one wishes to become a good designer,” Chan concluded.