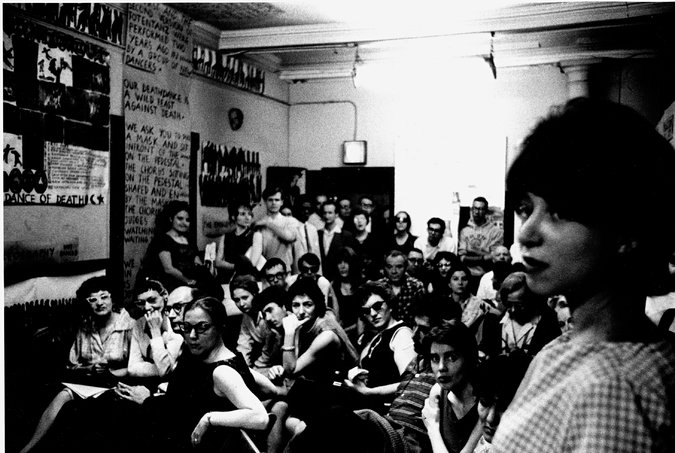 One Indian summer day we dressed in our favourite things, me in my beatnik sandals and ragged scarves, and Robert with his love beads and sheepskin vest. We took the subway to West Fourth Street and spent the afternoon in Washington Square. We shared coffee from a thermos, watching the stream of tourists, stoners, and folksingers. Agitated revolutionaries distributed antiwar leaflets. Chess players drew a crowd of their own. Everyone coexisted within the continuous drone of verbal diatribes, bongos, and barking dogs. ──Just Kids by Patti Smith

This is New York at the late 60s described by Patti Smith. In that era, downtown Manhattan was the paradise for poor artists. Low rents brought artists together. They ran their own alternative art spaces, helping each other for installing exhibitions and being audiences for each other. Various cross-sector and unexpected art experiments got their own place.

Nearly a half century has passed, alternative arts in those years were written in art history with the name of pioneer and entered in art museums as well as auction companies. However, the scenery of downtown New York was no longer still. In 2010, Patti Smith attended a public lecture where someone asked her that nowadays when young people come to New York, could they be like her? Patti said that they should find a new city. “New York is still an amazing city, but it closed the door for those who are poor and creative.”

In the book Alternative Art in New York, 1965-1985, artist and exhibition curator Julie Ault wrote that the art atmosphere in the 60s and 70s of New York was promoted by several factors: “A lot or even excess art population; diversity of culture and race among urban population; political environment of social movement and freedom fight; cheap commercial and residential spaces; lots of vacant urban lands; public spaces with less restriction; rising public cultural funding; as an important city for art.” Considering these numerous factors, the biggest change in New York is that the artists are difficult to afford the spaces and land. According to the report released by Centre for an Urban Future in 2015, expensive rents are driving the artists away and dissolving the creativities.

Where should artists go? From the 90s, many cities around the world tried to build into the artisan village like SoHo, East Village in downtown Manhattan. But why they were never admired by artists? One main reason is that the operators of these villages never noticed the reason why the artists gathered. An associate professor of art at the North-Western University, Lane Relyea, wrote: “(Art circle) became a larger system and spread across the country as the number of master of art was constantly increasing...artists should find other alternative ways of living besides business...they are creators as well as organisers. They must band together to generate mutual recognition, status, popularity and record.” In other words, artisan village is not just the geographical collection of artists, but a small society composed by artists where members rely on and assist each other for development. If this connection that could provide support for artists fails to form, these artisan villages could only exist in name.

The star artists from East Village and SoHo seem to illustrate many stories about becoming rich through cultural creation and even promote many items of cultural real estate. But they are hard to build into the energetic cultural communities, it is not because the number of artists is not enough or the qualities are not good, nor far away from the centre of art market. Instead, it is because they did not support and take the development of artists’ community seriously. As a matter of fact, in the globalised world today, art market could be reached no matter how far and art talents travel around the globe. Many new art cities just like downtown New York those years, which is the cradle of practice for alternative art and provides power for the innovation of mainstream art system.

There is a voice being heard—On self-publishing in Taiwan

How to run a temple?