Since Macao’s joining in La Biennale di Venezia in 2007, the Macao Museum of Art has been inviting local artists to participate in this international art fiesta. All the invited artists and curators are local talents from Macao. It provides a great opportunity for local artists to gain more access to resources in the art world.

I partnered with local ceramic artist Heidi Lau and participated in the exhibition. We originally met at the Museum of Chinese in America in New York. She was a co-creator of the first exhibition I went and saw there. Heidi and another artist created Chinese cuisines with ceramic to break the stereotype that believes there is only one type of Chinese cuisine. At the centre of the gallery, ceramic models of different Chinese dishes were set up on a big table. On the wall, a documentary that featured stories from Chinese cooks from different parts of the U.S. was playing. Looking back, the exhibition not only created the opportunity for me to meet Heidi but also inspired me to come up with new ideas on how art could help us tell local stories. 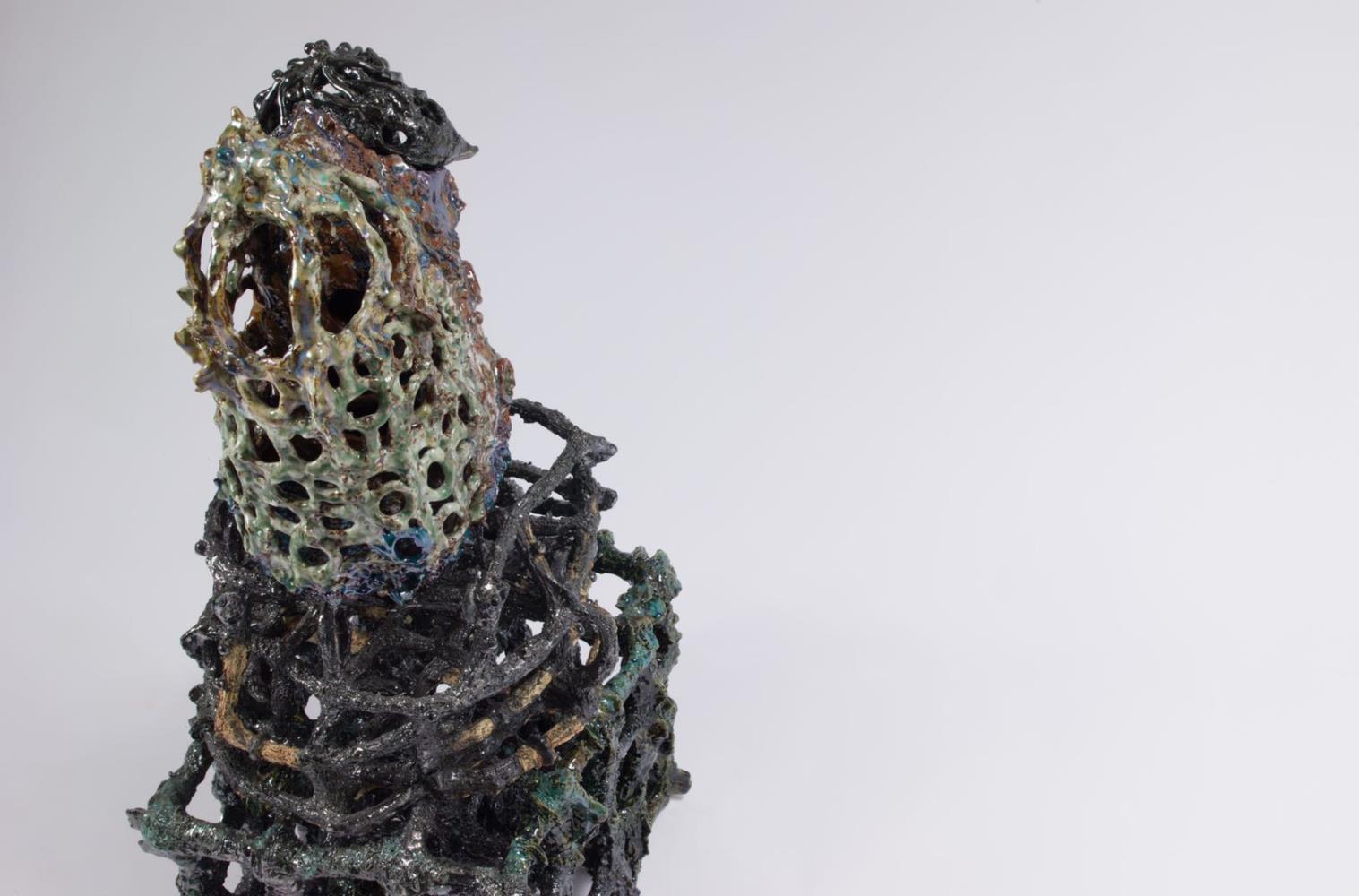 Song of the Exile, one of the exhibiting works at the Macao section of La Biennale di Venezia.
Song of the Exile is exhibited with ceramic work and audio devices.
There are two pieces of music performed by a Cantonese opera lover who has settled abroad for many years.

After deciding to join the La Biennale di Venezia, we discussed many interesting themes. We quickly came to the decision that we wanted to use the book Invisible Macao, written by cultural critic Lei Chin Pang from Macao, as part of the inspiration sources for our exhibition. We felt that we resonated with the book as we saw ourselves and our past in it. People in Macao have always enjoyed a special international and regional identity due to colonisation and geopolitical dynamics. The economic boom driven by the robust gaming industry in the past two decades has gained more international exposure for Macao. Macao’s development has since been characterised by this special identity and major economic leaps. What Macao is lacking though is its own voice from its people. From daily conversations, politics, economics, academics to cultural exchange, people from Macao seem to be having little say and significance in regional and international discussions. We either say nothing, or we are represented by others. But the fact that we are actually at the spot makes us invisible. I gradually learn that we need the ability to express ourselves and talk to the outside world.

Nine-Turning Zigzag Bridge, one of the exhibiting works at the Macao section of La Biennale di Venezia.
The work of art is showcased by ceramic work and a projector to illustrate the image of Nine-Turn Bridge in the Lou Lim Ieoc Garden in Macao.

Heidi’s works happen to have such communicative power. In contrast to me, Heidi rarely introduces herself to others through speaking or writing. Her works speak for herself. Heidi often tells me that her works are actually smarter than her. Heidi and I have both left our hometown Macao and settled abroad. That’s why we would often get together to talk about old memories. For example, we would talk about our school life back in Macao, the competitions we had participated in and the Hong Kong films that we had watched before. When planning the exhibition, we learned on social media that black bear BoBo that had lived in Flora Garden in Macao for over three decades and had been part of many people’s childhood memory, has passed away. These kinds of events stirred up our emotions and old memories. We then fused these sentiments into our art creation process and the exhibition. We used our works of art as the medium to preserve our memories and emotions.

Heidi uses nostalgia to tell stories while creating arts to ease that nostalgic feeling. This is also a process for her to reassess her nostalgia. She once shared Svetlana Boym’s article Nostalgia and Its Discontents with me. Boym defines that there are two kinds of nostalgia. One is restorative nostalgia, which stresses nostos (returning home) and attempts a transhistorical reconstruction of the lost home. Reflective nostalgia, the second nostalgia according to Boym, thrives on algia (the longing itself). To some extent, reflective nostalgia is a prospective nostalgia because people are looking back in time to find answers to present challenges. According to Heidi, Boym’s article enabled her to understand her nostalgia better and that reflective nostalgia was the message that she wants to convey at the exhibition. It’s something that people in Macao can share with the world.

The new generation of people in Macao is becoming nostalgic, which could turn into a negative and defensive social mentality. But this could also nurture a reflective awareness of locality and civic society. We are hoping that this exhibition could provide the audience with the chance to explore their Macao cultural identity as well as the past and future of the city.

On creative inspiration and learning

Getting published in Taiwan

The good education on art that we have missed these years: on art education (1/2)