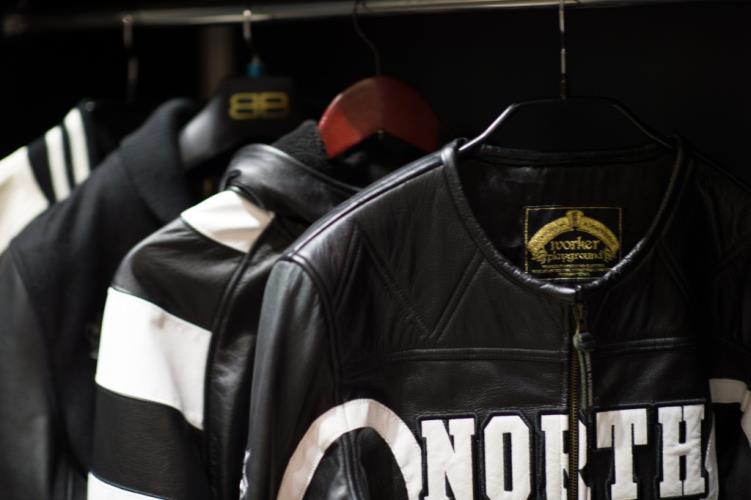 Motorcycle leather jackets and baseball jackets are classics that never get old in men’s fashion. They are also must-have items in the collections of local brand Worker Playground every season. Creative Director Vincent Cheang infused old-day people and things such as workers’ stadium and amphibious aircrafts into design concepts. In his view, the collective memory of every era is just like leather jackets — the older they get, the more charming they are.

Worker Playground was established in 2012, modelled after American street style integrated with local cultural elements. The brand name reflects Cheang’s sentiment towards Macao’s Workers’ Playground. He said: “The pitch evokes collective memories of boys from the 80’s. Back then, the most trending item was leather jacket.”

This is why Cheang used motorcycle leather jackets and baseball jackets as his start-out products. Since its establishment, Worker Playground has made crossovers with local and Taiwan bands, and has tailor-made costumes for musician Jun Kung. During the interview, Cheang showed a motorcycle leather jacket with the words “Hac Ching Toi” (abbreviation of the Chinese names of Areia Preta, Ilha Verde and Toi San) on it, which carries a strong gangster feeling. Growing up in the chalets in the northern district, Cheang has profound experience with the lifestyles of the southern and northern districts of Macao.

Cheang is a big fan of Harley-Davidson, but his creativity is never limited to the motorcycle culture. He can even add local style to Nose Art (decorative painting or design on the fuselage of an aircraft to express homesickness). In the 50’s, Macao’s external transport is mainly planes. There was an amphibious plane named “Miss Macao” which was hijacked not long after it took flight, making it the first-ever plane hijacking since the opening up of Macao. Cheang drew a lady lying on a plane with Nose Art style, making reference to “Miss Macao” in the history of aviation with what seemed to be an ordinary leather jacket.

Cheang has many years of experiences in music and graphic design, but he is a novice in costume manufacturing. He spent three years to explore the manufacturing process of the fashion industry, establish connections, screen manufacturers and recruit design team. Now he has veterans with over 20 years of experience in his team, and that is why the quality of Worker Playground can be maintained while paying attention to details. Cheang confessed: “It is impossible for one person to take up all processes, which includes patterning, material selection and proportion calculation. It is crucial to find a good master and don’t give up after the first or second failed attempt. You have to look seriously in the circle. We require masters who cooperate with us to have in-depth knowledge of the process and clearly understand designers’ ideas. It would be best if they are long-time partners.”

After the establishment of the brand, Worker Playground smoothly opened its first retail store, but it encountered other challenges after operating for some time—how to test market preferences, how to manage storage, and retailing is another topic. The store was closed down after a year of operation, but Worker Playground developed a new retail mode. During the global economic depression in 2008, some brands sold their products with the mode of pop-up shops in order to save cost. For instance, large container trucks were used as storefronts or show space, which appears in different locations for a short period. Since this year, Worker Playground has made its appearance on The Broadway, testing market preferences with the mode of a mobile stall. Later, Cheang changed the mobile stall to a mysterious black box, which better showcases the brand style. It has now become the symbol of the brand.

In the era of booming online shopping, the challenges of running an actual store are constantly increasing. Cheang decided to use pop-up shop as the primary mode of development. Apart from Sanlitun of Beijing, he is also discussing cooperation plans with fashion brands in Chengdu. “The emergence of online shopping has impacted the traditional shopping mode. Showcasing products with pop-up shops can cut costs and enhance the brand’s affinity. An overly-stylish storefront will scare customers from engaging,” said Cheang.

Despite being a local brand, the majority of Worker Playground’s target customers come from the mainland. Cheang lamented that people in Macao will not be singled out as targets of culture and creativity projects because local people are indifferent to culture and creativity, resulting in a lack of support. He believed that it might be partly due to the fact that Macao is long-affected by media in neighbouring regions, and takes entertainment and pop culture in the surrounding areas as the indicator. Thus it is hard to recognise local brands.

Cheang once applied for sponsorship in culture and creativity and fashion, but there is a large gap between the amount he has applied for and what he actually gets, since the store in his proposal has been replaced by a pop-up shop. He thought that culture and creativity is an ever-changing industry, and the approval authorities have to keep up with the trend and not be too rigid. Having been in the design industry for almost 20 years, Cheang said that government departments are major clients in the advertisement design industry. Unfortunately, with the exception of individual departments in charge of cultural arts, most departments have a relatively lagged understanding of visual arts, therefore restricting designers’ creativity. He added that locals who engage in culture and creativity are mostly amateurs and rely on the support of their friends. He hoped that authorities should avoid blindly praising themselves when promoting the cultural and creative industry, and think of ways to catch up with the international development in the cultural and creative industry.