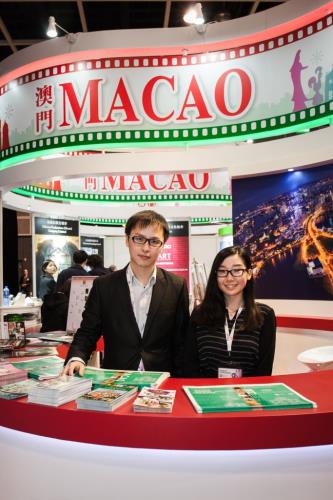 This year marks the 20th anniversary of the Hong Kong International Film & TV Market (FILMART). For the first time, the Macao Government Tourism Office and the Cultural Affairs Bureau of the Macao SAR Government work together to set up a “Macao Pavilion” at the FILMART. Opened on 14 March, FILMART was held at the Hong Kong Convention and Exhibition Center for four consecutive days, with the aim to facilitate cooperation within the film and TV industry. FILMART has always been an important marketplace for film financing, distribution, and production, etc. This year, the event welcomed an overwhelming turnout of more than 7,300 buyers.

In this edition, FILMART featured 800 exhibitors from more than 30 countries and regions, including the United States, France, Japan and India. China accounted for most number of exhibitors, with provinces and cities such as Beijing, Shanghai, Guangdong and Hangzhou all having their pavilions. Hong Kong’s film and TV organisations, such as Sun Entertainment, Emperor Entertainment Group, Media Asia and Television Broadcasts Limited were also among the participants. In addition, Macao SAR set up the “Macao Pavilion” at the FILMART for the first time to showcase the city’s film and TV culture by local entertainment agencies like Chessman Entertainment and Pride Entertainment to the international market. According to our observations on the spots, lusophone investors were interested in the Macao booth and products, and business talks aplenty. The promotional purpose seemed to have achieved.

In addition to exhibition booths, FILMART has organised 400 screenings and over 70 professional seminars with talents in movie, television, post-production, animation and music as speakers. Delegates from several popular animation studios shared their recipes for success in the animation conference “How Can a Small/Medium Size Animation Studio be Successful in the Global Market?”.  Samuel Choy, General Manager of Bliss Concepts Limited, which produced the famous Hong Kong animation McDull, said: “The production of McDull enabled us to tap into the mainland market, and we realised that there is tremendous development potential. For instance, the mainland lacks serial animation similar to the US superheroes movies. This is where we are heading towards.”

Kazuhiro Nishikawa, director of Japanese Dandelion Animation Studio, also said that they would study the likings of Chinese audiences and add Chinese culture in their animation to go into the mainland market. Nishikawa said that Japan is currently affected by declining birth rate and there is a drop in animation audience. It is necessary to study and plan to tap into the international market for the sustainable development of the animation industry.

On the other hand, the TV World 2016 – International Forum was simultaneously held at the venue of FILMART, with “‘Belt & Road’ Business Opportunities for the Global TV Industry” as the topic, and explored new opportunities for the film and TV industry brought by the Belt and Road initiative. The industry predicted that cross-border film partnerships would become a major development trend in the future. At the Forum, Chen Bin, Senior Vice President of DMG YinJi Film, Television, Entertainment & Media Company Ltd., said: “TV industry in the mainland is undergoing rapid development. Box office is in par with that in North America, and has great development potential. If the Belt and Road initiative is developed properly, it will enable Chinese film and TV industry to internationalise and go further than the Chinese market. We predict that there will be a lot of cross-border cooperation, and cross-culture and cross-language exchanges in the future.”

However, Vasily Korvyakov, Partner of Veles Media from Russia, pointed out that: “Because of cultural differences, the preferences of the audiences in different countries could be quite diverse. Cross-border film partnerships could therefore prove difficult, since there will be limitation in the process of creation. For instance, the storyline has to conform to the culture of both places. But under the Belt and Road Initiative, Sino-Russian trade and commerce will become more frequent, and topics with common interest can be found. For example, love or deception stories between Chinese and Russian citizens should be well-received.”  Italian producer Giovanni Robbiano agreed, and said that the opening of the international market will foster integration of film and TV productions by different cultures. In the future, there will be more high-level joint collaborations.