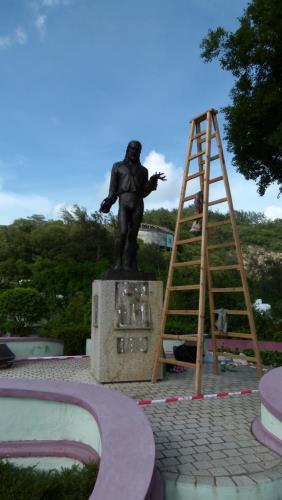 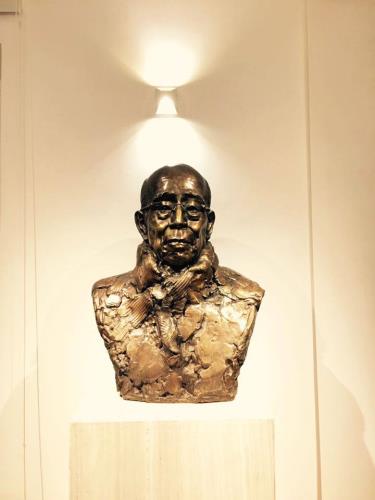 This August, the Jao Tsung-I Academy officially opened. Inside, there is a half-body bronze sculpture of Professor Jao, made by local sculptor Wong Ka Long. The statues of Camoes in Taipa, Matteo Ricci at the Ruins of St. Paul and one in the old home of Ye Ting are all made by Wong. As a sculptor from Macao who has left his mark around the city’s famous landmarks, how does he view public art in Macao?

Lei: Can you describe the creation process of your half-body sculpture of Professor Jao at the Jao Tsung-I Academy?

Wong: Professor Jao is a key figure in Sinology, so I felt a lot of pressure during the process, but also a deep sense of honour. Upon completion, the sculpture will stand for decades, outliving many people of its time. I hope people of future generations can learn about this person through the sculpture. As a result, I didn’t apply many of my own stylistic traits onto this sculpture and approached it with a more objective and realistic method to truthfully reflect that, particularly through the texture of the clay. I learned about Professor Jao in the Dunhuang Museum; Dunhuang’s clay sculpture is also the gem of sculpture in China. I tried to link the flavour of clay with this great Chinese scholar, and so dared to exhibit the crude texture of clay on the sculpture of Professor Jao. This is one way that I embellished the sculpture.

Wong: The sculpture of Camoes was my graduation piece in 1999. At the time I only had in hand a fifty pataca note with a picture of Camoes on it, and I thought, should I turn Camoes into a military figure or a poet? My teacher said Camoes is a literary figure so of course I need to sculpt him in that way. So my sculpture of Camoes shows him casually wearing something like sleepwear, in the middle of the night, deep in thought alone. I like the feeling of being free and unconstrained so I tried to project that onto Camoes the poet. For me, sculpting a dead person gives me much greater room for creativity, as opposed to living people where there are many more things I need to be cautious of, including any issues that may arise as a result of the artwork.

Lei: You’ve created many sculptures in Macao in the past decade. How do you feel knowing your creations are everywhere here?

Wong: In terms of quantity, it’s a real honour. But my next challenge will be scale. If I can for example add some lines and colours to the city skyline so that there’s something new for people to look at, I think that’s a good thing.  For example there’s a graffiti park in Rua dos Mercadores that I think achieves that. I was one of the first people to build that park. Up until today, every few days some young people go there to update the graffiti. I think that’s really revitalising the community.

Lei: Public art is very popular in the West, giving artists the power to redefine the concept of space. Where do you think we are in Macao with that?

Wong: It’s very hard to do public art and find a government organisation that will take full responsibility for it. The result is typically that the sculpture can only be displayed for a set time, and that time may only be one week. Actually, some government departments do really want to do it, and you can even see some rubbish trucks or refuse disposal stations around the city that have been given facelifts, that’s something I was involved with. But in the end, some government departments found that the allocation of work and the rights of the project were unclear and it was terminated. And the truth is, if we want to finish a piece of work, we need a production line, and the cost of that is very high. But government departments don’t understand this, and it makes our lives very difficult. The Cultural Affairs Bureau is more understanding. When I think about it, to be able to produce art under a system such as Macao’s is very very fortunate.

Lei: Apart from that, how accepting is society towards different styles of art?

Wong: How can you use the word “accepting”? There’s only ever been one style. That style is not to offend, not to provoke complaints, the customer is always right. A friend of mine said that artists in Macao are very different from those in Hong Kong and Taiwan. There, there are artists that have very obvious personal styles, but in Macao, people draw the line very clearly between making money and producing their own art. They will leave their own style for their personal works.

Lei: What is the level of the public’s education and acceptance towards public art?

Wong: Once an old lady told me that the door of the park on Rua dos Mercadores was like a dagger pointing at her home, and caused her to fall over on the stairs. She wanted to find the person in charge to file a complaint. It’s a very special case and reflects some people’s attitudes. But of course there are also people who are very happy about what we’ve done to some of the rubbish disposal stations. In fact as long as there is someone to act as a guide to explain what’s going on, it’s possible to slowly lift people’s understanding. Actually it’s harder to change the attitudes of bureaucrats.

Lei: What do you think about the arts scene in Macao right now?

Wong: It’s pretty messy. At the start of the whole creative cultural industries thing, the government seemed to be looking for a new group of people, and then we became the “older generation” and were pushed to another position. Also, is the cultural and creative industry strategy in Macao the same as the convention and exhibition strategy? Can Macao produce enough high-quality cultural and creative industry products in large volumes and in a sustainable way to fulfill the demands of trade exhibitions? And even if the numbers look good, what about the quality? The government allocated a large sum of money for this, but ultimately will the money just go back to exhibitions and advertising? Will artists and crafts makers end up at the bottom of the food chain? Will the industries most in need of support become the weakest? These are all things we need to think about carefully.

IaoHin Gallery: challenging the status quo of the art scene in Macao