Macao on catwalk: the local fashion scene and future outlook

As more international fashion brands are launched in Macao following the development of large-scale entertainment arcades and hotels, Macao has seen a surge of homegrown fashion designers who have succeeded, with their innovation and determination, in promoting to local consumers the aesthetics of living, and in demonstrating the excellence of Macao’s fashion design. 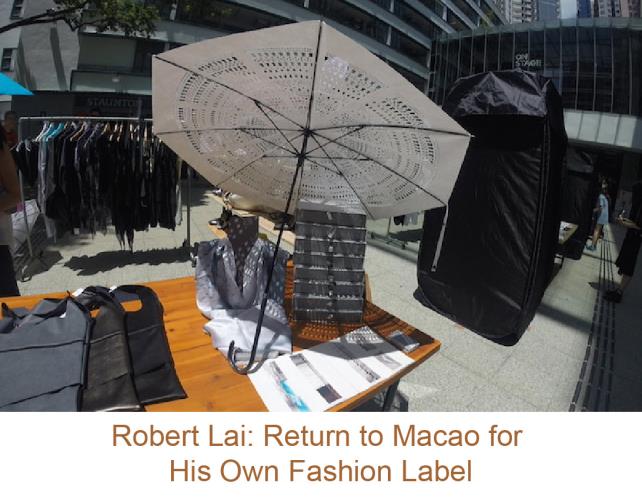 On the day of interview, the pioneering fashion brand from Macao, Lines Lab, has just relocated from its original site at Albegue in the Calçada da Igreja de S. Lázaro neighbourhood to Macao Design Centre in North District, the latter being a brand new venue converted from a garment factory.

Founded by two Portuguese designers, Manuel Correia da Silva and Clara Brito, Lines Lab began as a concept in 2002, and came into being in Macao in 2006. From its humble beginning in a handbag design collection, it has now evolved into not just a fashion design brand but a creative agency. Lines Lab now has a team of five full-time and four part-time staff, and is well-supported by four collaborative designers. Committed to promoting Macao and Portuguese fashion offerings both in and outside Macao, it is marked by bold, experimental designs, and is one of the earliest fashion brands in Macao to attract local and worldwide media attention. It was rated by The New York Times as one of the top attractions in Macao in 2012.

Speaking of the early days of Lines Lab, Brito recalled that when she first arrived in Macao to work on this startup with Correia da Silva, fashion design could hardly be called an industry in Macao.

“Back in the 1970s and 1980s, there was only garment manufacturing in Macao, which focused on large-scale production of clothing rather than fashion design. As this manufacturing industry dwindled in the 1990s, there were hardly any fashion-related enterprises left. It was not until a decade later, when Macao saw an influx of international fashion labels and casinos, that the city was saved from a strange phenomenon where there were only tailors but no fashion designers.”

The launch of various international fashion design labels in Macao, however, has also led to a peculiar feature in Macao’s fashion industry. It seemed as if fashion in the city could only be limited to two extremes: the likes of Giordano and that of Louis Vuitton, both being fashion brands from overseas based on large-scale production. In recent years, the government has doubled its efforts in supporting local fashion enterprises, albeit its policies are still in their initial stage. There is yet a substantial, sophisticated customer base in Macao who truly appreciates fashion. Moreover, Macao has hardly its own fashion media or commentators such as the likes of the late Winifred Lai in Hong Kong, let alone a mutually supportive fashion model industry.

“In Macao, the community is not interested to pursue lifestyle living. Since we have moved to Macao, we find it only natural to introduce an element of creativity in the local scene,” Brito remarked.

Brito studied fashion design in Lisbon and Milan, while Correia da Silva was trained in equipment design. Seeing fashion as a design discipline that connects more easily to the public, they encountered the same challenge as fellow local designers: a small local retail market. Brito estimated that there are only around ten fashion designers in Macao, with four working full-time. It shows how hard it is to earn a living from fashion design alone.

A small local market meant that products would need to cater to an export market, in order to offer scope for the development of these designers. So what are the ways to encourage the exports of fashion design?

“While the government organises some sales and marketing campaigns, most of the time it is down to ourselves, as we believe that the fashion designers know best the potential of their own products and their ideal markets,” said Correia da Silva.

Each Lines Lab item comes in an edition of no more than 500 pieces, each of which is carefully curated, and appeals to a very niche market. Their products are sold in many lifestyle shops in Asia that feature emerging design brands, such as Kapok in Hong Kong and VVG in Taipei. Since 2010, the two designers have organised a two-day festival each year, known as Macau Fashion Link, which showcased the works of Macao’s designers as well as those from the Pearl River Delta. However, the event came to an end in 2014 due to a lack of funds. Nevertheless, the two designers have succeeded in bringing about a new initiative called Munhub.

“The unusual name is derived from the Chinese word ‘door’, and it signifies the fact that Lines Lab is a promotional platform that opens doors for excellent design brands in Macao and Portuguese-speaking countries. Founded by just the two of us, Lines Lab has grown into a strong team over time, and we are aware of the challenges in growing a brand. Hence, Munhub is a commercial platform that we have set up in order to collaborate with other designers to promote local brands in Asia as well as globally,” said Correia da Silva.

Established in October 2014, Munhub launched its first promotional tour in Asia, with Hong Kong as its first stop, followed by Tokyo. Correia da Silva said that the reception at the promotional event at PMQ in Hong Kong has been encouraging, prompting an expansion of their B2B business.

“We expect that, with the opening of Macao Design Centre, 2015 will be a year of promising opportunities. The design centre houses a café, shops and design studios, and offers more choices to the consumers. The venue is a hub for designers, and will be instrumental in nurturing a stronger, high quality local clientele.”

Correia da Silva added, “The manufacturing era in Macao has gone, and what we need is to create and promote products designed or created in Macao. However, many designers from Macao have left the city in order to complete their training in design schools overseas. We think that Macao should have its own fashion design school to encourage the robust development of the local fashion design industry.”