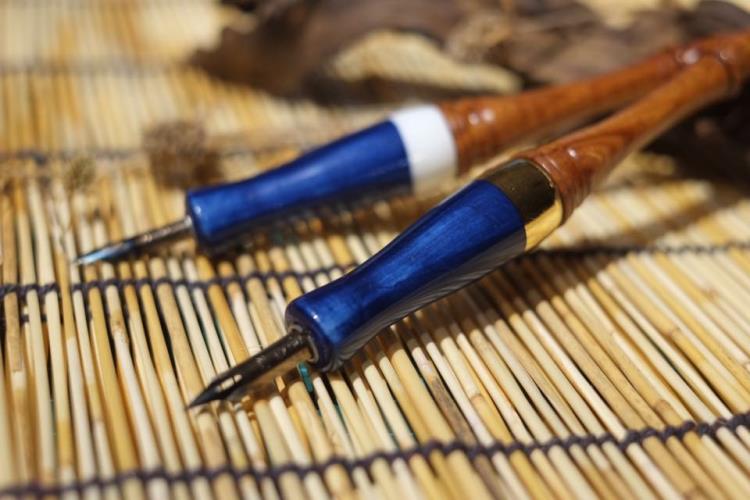 The letters and characters displayed by a digital screen radiate no warmth or emotion. But when you start writing letters on a piece of paper in your very own style, you are crafting an artwork that is genuine and that is yours. This is also the essence of calligraphy. Local artist, Aquino da Silva, has a great passion for western calligraphy. The letters he writes are as magnificent and powerful as paintings. With a dip pen and a bottle of water ink, he can share the beauty of calligraphy with his audience. Aquino is also dedicated to the promotion of this 200-year-old art culture that very few Macao people know about.

Falling in love with calligraphy

Aquino fell in love with this form of fine arts in a college class where he was deeply inspired by his calligraphy teacher. After that, he started to research on calligraphy on the Internet and began to learn calligraphy techniques by himself, and eventually formed the habit of practising calligraphy on a daily basis. Even today he still sticks to this habit. Besides practising writing letters on paper, which is the most basic exercise in learning to master calligraphy, he would also experiment fusing western calligraphy with products made of different materials, such as wood, glass, ceramic, etc., to give artistic souls to them. From Aquino’s perspective, he can combine tradition and culture with commercial use, which can increase exposure and contribute to the substantial development of calligraphy.

The most frequent job opportunities Aquino received are writing wedding invitation, or invitations in general, as well as seating cards for his clients. Renowned international fashion brands such as Louis Vuitton and Jo Malone, etc. are also Aquino’s clients. The hipster fad that has been trending in recent years also appeals western calligraphy to a general audience, as many people nowadays would like to write beautifully. Aquino, of course, wouldn’t miss this promotional opportunity. Since last year, he has been teaching courses on calligraphy in many education centres in Macao to provide people with the opportunity to get a glimpse of western calligraphy. As a matter of fact, the number of students is on the rise, which reflects an increasing interest in western calligraphy in Macao. Aquino believes that practising calligraphy can help people calm their mind and release their inner tension, making it a mental therapy suitable for urban residents.

Building his own pen, building opportunities

The elegantly-painted letters are not the only element that makes Aquino crazy for western calligraphy. There are also the calligraphy tools. To create great art, one has to have satisfying tools. The same goes for calligraphy. According to Aquino, there are very few stores in Macao that sell quality dip pens since western calligraphy is not yet popular in the city. Inspired by foreign calligraphers, Aquino started to build his very own dip pen from scratch. From the material selection, design, to the construction of the pen, the entire process was completed by Aquino himself.

This dip pen he made is delicate. It has even attracted the attention of people from other regions, including Malaysia, Singapore, Indonesia, etc. In Aquino’s opinion, there are market opportunities on dip pen outside of Macao. Subsequently, Aquino decided to take this idea to other markets. Just recently, Aquino had partnered with a Japanese manufacturer to produce a dip pen product made of wood and ceramic. Despite the high cost, Aquino had insisted on his innovative design and created a new path for dip pen products. Aquino’s dip pen was a success, highly praised by the public. A bookstore brand in Taiwan even proposed to cooperate with Aquino to launch it into the market. As the very first person to combine wood and ceramic materials in dip pen production, Aquino also feels obliged to promote western calligraphy through different channels to help it progress further.

Aquino had quit his well-paid job in the government and chose to pursue his passion for calligraphy. He believes that creativity is essential to every city in the world as it drives cultural diversity and brews the creation of arts. Aquino is hoping that he would have the opportunity to communicate and discuss calligraphy with calligraphers from around the world in the near future. He wants to keep on learning while helping to improve the western calligraphy scene in Macao. “We need to keep on creating new artworks, so that more people will be drawn to understand this art better. Then what we are doing would produce value,” Aquino concluded.