An accountant by profession, Ashley is member of several anime and comics associations in Macao. She started writing fiction, illustrated and drew the comic strip of Macao Daily in the early 1990s. Later on she took the role of comics writer, and she is now the managing editor of MIND², a comics magazine published by Comic’s Kingdom. Ashley also participates in organising the Macao Animation, Comic and Toy Expo, an event run by Macao Animation & Comic Alliance. 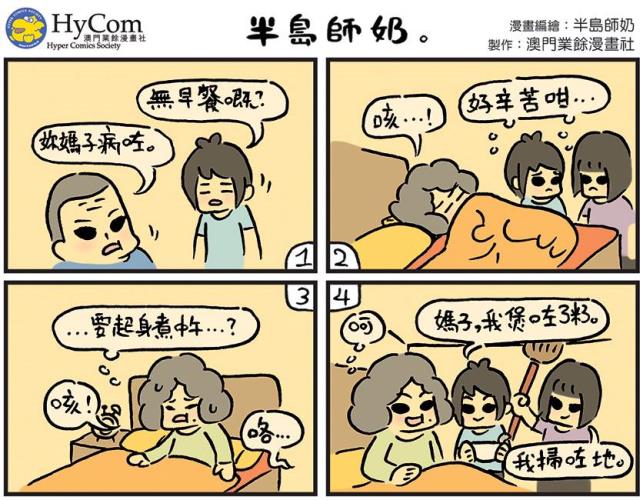 In recent years, we have seen some nontraditional yonkoma manga (literally four-cell manga, yonkoma manga is a comic-strip format that consists of gag comic strips within four panels of equal size) sprouting up in op-ed pages in Macao. I’d like to call it “neo-yonkoma manga”. At first, they appeared in social media sporadically. Then comics magazines started to invite those comic artists to draw, and comics associations steadfastly supported them to hold new work exhibitions. Now, their works can be seen from web media to newspapers, and eventually they are turned into comic books.

These years, Macao has had the right conditions to groom comic artists. Different types of media are also willing to publish their works. Yonkoma manga doesn’t need much space in a page layout, and this type of petite-size works has become a trend and we see a large number of them here and there.

The neo-yonkoma manga is different from the traditional one. First, it’s the layout. While the traditional one is more neat and simple, the new form of yonkoma manga is the opposite. Second, coherence in the content and structure is not necessarily required in neo-yonkoma manga. Instead, rich colour schemes and fine lines are employed; some even draw the cells like long running series, and use graphics software to create more eye-catching visual effects. Most of the works are comedy, but not all of them are complete stories. Even if it is, plotting the story with strong ebb and flow is not necessary, nor is a dramatic ending required. Sometimes, this new form of comics only needs to display a series of cute images. Interlocking plot lines, simple yet subtle style in drawing, and thoughtful stories that are at the core of traditional yonkoma manga are not a must anymore.

How to judge the quality of yonkoma manga? It has been said that the work is a failure if you are still able to comprehend the story by just reading the words but not watching the images. But now, some artists deliberately decline to follow tradition, and they prefer adding garrulous dialogue or narration, turning the work to short manga series or even a series of illustrations. They do not stick to established patterns. They believe that so long as the manga has four cells, it’s a four-cell manga.

In respect of the theme or subject of the neo-yonkoma manga, the sky’s the limit. Social changes, economic development, the advancement of technology, the expansion of our living environment and our horizons, as well as changing values and ways of thinking, all these give us more food for thoughts than our predecessors when it comes to creating artwork. Socio-political issues, bits and pieces of everyday life, personal feelings, as well as the application of technology and interpretation of text symbols, etc., all can be inspirational ideas for creativity.

Comics also have a function in the society: it makes noise. Comparing to their predecessors, today’s comic artists are most likely influenced by trends in neighbouring regions, and they are no longer restrained by conventional means of publication. With no hurdles and apprehension, artists have more liberty to satirise, to criticise, and to think aloud.

In Macao, an artist doesn’t make money from his or her art. The same applies to comics artists. They draw because they love drawing, and they don’t see lines as boundaries. Readers are most likely of the same generation as the artists, so they are on the same wavelength and understand each other. Artists draw yonkoma manga according to what they like. If you judge their works by traditional standards, you may feel that it isn’t really your cup of tea. Having said that, what we can do is to move on, as everything around us keeps changing. And once they’re gone, they’re gone forever. So, let’s keep an open mind.

A bite of memory

The importance of scriptwriters

Is there anything beyond shopping malls for Taiwan’s heritage?

Between calm and passion—On writing for a literary magazine (1)

A collaboration between Shekou in Shenzhen and the V&A Museum